Spotlight: Born With A Tooth

Big congratulations to Joseph Boyden, who earlier this week was awarded the 2008 Scotiabank Giller Prize for his novel Through Black Spruce. Good on you! In celebration of Joseph's win, we've decided to spotlight Born With a Tooth, his first published book recently re-released by Cormorant Books. 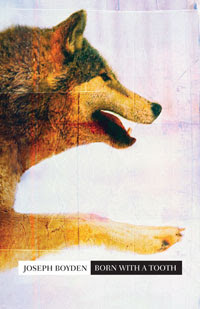 Until the second half of the twentieth century, one of the worst problems with the way First Nations peoples were depicted in literature was their portrayal as “First Nations” first and “people” second. It is perhaps one of the legacies of the old school of anthropology — a field of study that once represented, more than any other, a confluence of scientific rationalism and
colonial ideology. In any case, by turning flesh-and-blood human beings into mere concepts, concepts that can be classified and organized and filed away and forgotten, words alone have proven more than enough to dehumanize and alienate entire cultures.

Joseph Boyden’s Born With A Tooth is different. Although its collected stories are very much about First Nations peoples and the issues they have to face, as much emphasis is placed on who they are and not just what they are. The characters we meet are not just Cree or Ojibwa. They are not just our preconceptions and categorizations and stereotypes. They are single mothers who make ends meet by working at a bingo hall. They are middle-aged punk rock princesses burning up the stage one last time. They are little boys who dream of becoming professional wrestlers. They are men who believe they can become whatever they dream. They are people who talk too loud or not enough, who drink too much or not at all, who fall in and out of love, who grieve for what has been lost even as they gaze with hope at what is to come. Maintaining a careful balance of humour, warmth, indignation, and dignity, Boyden succeeds brilliantly in presenting the inhabitants of his Northern Ontario reserve not just as “a people,” but as people.
Posted by Cormorant Books at 11:48 AM

Email ThisBlogThis!Share to TwitterShare to FacebookShare to Pinterest
Labels: awards, Born With A Tooth, Joseph Boyden