Jeffrey Round, author of The P-Town Murders and its sequel Death in Key West, talks about his trip to Mexico to research his upcoming novel The Honey Locust, coming out in the Fall from Cormorant Books.

Read it!
Posted by Cormorant Books at 9:43 AM No comments:

Email ThisBlogThis!Share to TwitterShare to FacebookShare to Pinterest
Labels: author post, Death in Key West, Jeffrey Round, The Honey Locust, The P-Town Murders 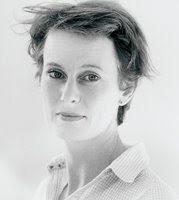 Lucette ter Borg, author of The Gift from Berlin, is in town for the Shift festival down at Toronto's Harbourfront Centre. Yesterday, she was interviewed by The Toronto Star - which you can read here.

Uh, yeah. I thought it ended a little ... abruptly. But still, you should see Lucette's resume. Visual artist? Filmmaker? Journalist? She's a fascinating woman.
Posted by Cormorant Books at 10:11 AM 1 comment:

The Young Rascal's Guide to Publishing: An Overview 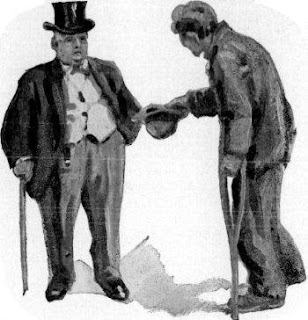 Apparently I read submissions with a monocle.
Lately I've been mulling over ways to provide original content for this blog. Probably because I've been overthinking it, nothing really good came to mind - that is, until I stumbled across an old comment on the wall of the Cormorant Facebook group.

Briefly, it rather vehemently dressed us down for claiming to be

"... open-minded only to impose so many prejudicial restrictions towards fledgling writers, basically the next generation of Canadian authors you allege to support ... I speak for myself and any number of Canadian writers stonewalled by the little-tin-god politics practiced by you and your peers."

I answered, as courteously as I could, that the situation wasn't like that, wasn't like that at all - at least not at the small press I work for. I won't go into the details of my response here (although you better believe I'm going to address the topic of submissions in the future) but suffice it to say, there still seem to be quite a few misconceptions people have about the publishing industry that could and should be addressed in an informative, and, dare I say, entertaining fashion.

Which is where I got the idea for The Young Rascal's Guide to Publishing: a series of original posts in which me and my colleagues attempt to give you a behind-the-scenes look at the workings of a small literary press.

What'll make this series so awesome is that it'll be just as educational for us as it will be for you. We're still trying to figure out the ins and outs this industry ourselves - and in this ever-changing world of mass communication, there'll always be something new to learn.

Here are some of the things this series might cover:
- how to get into publishing
- submissions
- editorial
- marketing
- design
- book sales
- publicity
- production
- working with authors
- events!
- books and the internet
- more!

And just to get it out of the way now, life is decidedly not glamorous for the vast majority of us. Yes, there are perks - free books, an opportunity to meet interesting people, and a chance to help shape culture - but the business is nothing like the cigar-chomping champagne-sipping backroom-dealing Victorian tea party in a smoke-filled room that some people make it out to be.

We do it because we love books. Period.

-BJI
Posted by Cormorant Books at 3:00 PM No comments:

The current Tuesday Essay at Globe Books (Raising gems, together) is a collaborative piece written by the SPiN writing group (Underground author June Hutton, Jen Sookfong Lee, and Mary Novik). It's a neat little profile about three writers who've stuck together through thick and thin, and are now starting to experience success.

Go on, have a read.
Posted by Cormorant Books at 10:19 AM No comments:

cormorantbooks.com at The Globe and Mail Online Books site

I'm shocked I didn't pick up on this when it first came out. That's what I get for my lapse in attention - now I have to go print this out and show it to my parents:

Cormorant Books re-launches its website, and that makes me reflect ...

Big thanks to Peter Scowen, who works his butt off to support us online. Without people at major media outlets like The Globe and Mail to give us a platform, life for us marketing-types would be so much harder.
Posted by Cormorant Books at 1:49 PM No comments:

With the news of Mark Blagrave's nomination for a Commonwealth Prize, I thought it would be a good idea to dust off his series of excellent posts for this very blog, describing his experience as a first time novelist: 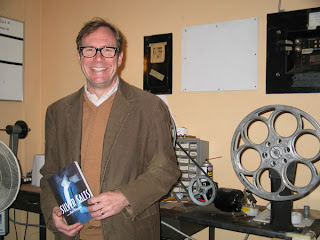 Rumble, young man, rumble.
Fantastic news for Cormorant author (and blog contributor) Mark Blagrave: his debut novel Silver Salts has been shortlisted for the Commonwealth Writer's Prize for Best First Book. Previous winners of the award include Anne-Marie Macdonald (Fall On Your Knees) and Mark Haddon (The Curious Incident of the Dog in the Night-Time).

Our congratulations go out to Mark, and we wish him the best of luck in the next round!
Posted by Cormorant Books at 12:12 PM No comments:

A couple of weeks ago, an article in The Globe and Mail decried the fact that Canadian authors do not sell very well, even in their own country, and laid most of the responsibility for this on Canadian publishers, accusing them of not marketing their authors very well.

To which the publisher of Cormorant Books, Marc Côté, responded by pointing out that the situation is not as cut and dry as the previous article claimed.

Marc's response paints what I believe to be a fairly accurate portrait of the Canadian publishing environment as it stands now. The root causes of the current situation are so deeply embedded in our ongoing national identity crisis that it is naive to lay all the blame on a single group of people for what is happening. Which isn't to say that Canadian-owned publishers aren't partially responsible for the way things are - we are - but to claim that we are the end all and be all of it is like blaming farmers for bad weather.

Anyways, here's Marc's article. I'm curious to see how you folks feel about it.
Posted by Cormorant Books at 12:21 PM 1 comment:

Email ThisBlogThis!Share to TwitterShare to FacebookShare to Pinterest
Labels: awesome 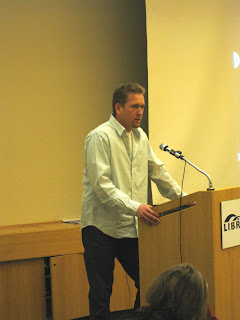 Last Thursday I got my first taste of an author reading from one of Cormorant’s very own at the Toronto Reference Library. It was an amazing experience — to feel a part of the show rather than just an audience participant, even though I wasn’t the one reading!

Dave Hugelschaffer flew in from his hometown of Edson, Alberta to read from the second instalment of the Porter Cassel firefighter mystery series, One Careless Moment. The book is about a firefighter, Porter Cassel, who finds himself on loan in Montana to help fight a recent outbreak of fires. When a sudden burnover claims the life of a firefighter, Porter, as the highest rank official, is blamed and asked to leave.

Dave read this opening scene of the book and held his audience captivated. There were audible gasps and murmurs at all the right times, and at the end of the chapter — a cliff hanger — there were disappointed groans, people wanting to know more. I couldn’t help but get caught up in the emotion involved too, letting loose my own sigh. It was intense.

I was pleasantly surprised at the turn out for the event. Roughly 50 mystery lovers showed up and seemed quite excited by the whole process. Everyone was chatty and seemed to enjoy the show. I got to speak candidly with a few members of the audience, and their enthusiasm was contagious. Everyone left the Beeton Auditorium with a smile on their face.

As a recent addition to the Cormorant team, I don’t think I could have asked for a better first time experience when attending one of our events. 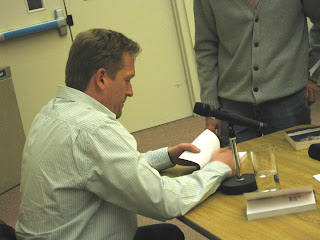 As mentioned, the Toronto Reference Library hosted the event, which is part of their Lit Lunches Series. In particular, this instalment is known as their Mystery Novelists with Killer Careers. Also in attendance was April Lindgren’s, reading from her debut novel, Headline: Murder.

Posted by Cormorant Books at 2:56 PM No comments:

In 1831, eighteen-year-old Oonagh Corcoran emigrates with her sister from southern Ireland to Upper Canada. In the deep folds of cool, green forest off the vast inland sea of Lake Ontario, she believes she has found paradise — only to discover that the New World harbours its own horrible injustices when she meets a fugitive slave from Virginia named Chauncey Taylor. Love grows between them as Chauncey slowly reveals his terrible past to Oonagh, reliving the pain and tragedy he and his family suffered as slaves. The two find that even in their small, accepting community, there are certain lines that can never be crossed.

Based on historical research, Oonagh is both a powerful love story and a gripping tale that reaches deep into the secret heart of our nation’s past.

Read the preview!
Posted by Cormorant Books at 1:43 PM No comments:

One Careless Moment - The Media Blitz!

Seems nowadays like Dave Hugelschaffer, author of One Careless Moment, is all over the internets. We've got an interview with him up at Open Book Toronto, a review at Quill & Quire, and another review (and video!) up at The Globe and Mail.

And we're also proud to present the official trailer for One Careless Moment.

(Note: For those of you with a faster connection, you can view the high quality version of the video. Just click on the little HQ button at the bottom-right corner of the screen.)

Posted by Cormorant Books at 11:00 AM No comments: