Thought I should mention a neat little reading series being held at Toronto's Glad Day Bookshop called Proust and Company. As described at the official website:

Author, editor and filmmaker, Jeffrey Round hosts this bi-monthly event featuring renowned authors and musical guests. Drop by for some first-rate reading, great music and a rousing Question & Answer period, as well as food and drinks. Admission is free.


Jeffrey Round, as you may know, is a Cormorant author (The P-Town Murders, Death in Key West) as well as past contributor to this blog.

The next Proust and Company event will be taking place on Saturday, February 7, from 8-10 PM at the Glad Day Bookshop. Readers will be Sky Gilbert, Zoe Whittall, and Nairne Holtz.

Proust and Company also has a facebook group you can join to receive updates. So do it.
Posted by Cormorant Books at 10:36 AM No comments:

As a young girl living at the end of the nineteenth century, Agnes White is drawn to the “wrong” things. Growing up, she finds herself fascinated by microscopes, dissections, and anatomy — hobbies that deem her unladylike. Yet despite the criticism of those around her, and the obstacles set in place preventing women from assuming traditional male roles, Agnes chooses to
pursue her calling to become a doctor, even if it means taking on the illustrious medical establishment at McGill University.

Inspired by the life of Maude Abbott.

Read the preview!
Posted by Cormorant Books at 1:14 PM No comments:

Good Monday to you all. Today we present PDF previews of a couple of books due in stores this month:

One Careless Moment
by Dave Hugelschaffer

The second installment in the Porter Cassel Mystery series, One Careless Moment is the thrilling tale of a forest firefighter caught in the deadly politics of a small Montana town. A gripping mix of action-adventure, procedural mystery, and a detailed look into the lives of the brave few who defend the forest.

Written by Dave Hugelschaffer, who knows a thing or two about fighting forest fires.

Read the preview!
Read the Globe and Mail online review!

One of the top astrophysicists in the world, Montreal-born Hubert Reeves has turned his attention from the stars back down to Earth - and what he finds alarms him. First published in 2003 (before An Inconvenient Truth) and drawing from the latest scientific data, Reeves comes to the conclusion that we are in the process of making our planet uninhabitable, and discusses solutions that must be implemented before it's too late.

For more PDF previews, check out our downloads page.

Coming soon: The preview of The Heart Specialist
Posted by Cormorant Books at 1:30 PM No comments:

A Sea of Potential

Sorry to go off topic, but I feel it would be remiss to let this moment pass without saying something. Let it be known that the following statements are my own, and do not represent Cormorant Books Inc. Have a wonderful day. - BJI

On a planet occupied by almost ten billion different human beings, it's unfathomable to believe that not a single one of them is in the process of achieving the noteworthy.

Indeed, extraordinary things are accomplished by people all the time. And yet, for whatever reason, we - you, I, we - continue to accept limitation as a matter of course. Worse, we construct and enforce limitations, upon ourselves and upon others, long before we ever arrive at the edge of what we are capable of.

This, I believe, is the greatest tragedy of our existence. The denial of our right to be the best people we can be.

Which brings us to January 20th.

January 20, 2009, is a day labeled historic, not just for Americans but for the world. If you are cynical, you can consider the day no more or less historic than any other day - and you'd probably have a strong case in your favour. As mentioned above, people accomplish great things all the time. Why should we laud one person's triumph over another's?

I'll tell you why. Because on days like these, days where we all acknowledge that something has changed, a little light goes on in our collective consciousness. That light shines past the edges of the map we all follow, the map that tells us where we can go and what we can do, and reveals that there's still so much more water left to explore; that anywhere, and anything, is possible.

We are now, all of us, people who live in a world unthinkable twenty years ago. Before January the 20th, we were divided into two camps: those who believed there would be a black president in our lifetimes, and those who didn't. Now it doesn't matter what we believe, because we are now all witnesses.

As a minority, I can now have faith: not just in myself to excel, but that others will also believe in me, as long as I give them reason to, and regardless of my name or my eyes or my skin. I can now see how much water there is left, how much farther I can go, and that there is no good reason to ever stop.
Posted by Cormorant Books at 7:21 PM No comments:

Email ThisBlogThis!Share to TwitterShare to FacebookShare to Pinterest
Labels: awesome 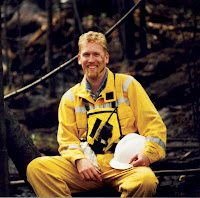 The intrepid Dave Hugelschaffer.
Hop on over to our friends at Open Book Toronto and take in an interview with Dave Hugelschaffer, author of the Porter Cassel Mystery Series (Day Into Night, and most recently, One Careless Moment).

Here's the interview - go and read it! The man was a firefighter. Who fought forest fires. Aren't you the least bit intrigued?

Look for One Careless Moment in a bookstore near you!

Posted by Cormorant Books at 4:42 PM No comments:

Our New Home, some news

The new Cormorant website is up. Check it out - and let us know what you think.

And in case you missed it, here's the trailer for Underground, by June Hutton, due out in March:

A big hand and plenty of kudos to the good people at the Slaight Foundation, who will be donating copies of Charles Pachter's M is for Moose to more than 4000 schools in Ontario this month.

Last, but not least, our own Jeffrey Round (author of the upcoming murder-mystery Death in Key West), has had six of his poems published at the Maple Tree Literary Supplement website. Have a read, why don't you?
Posted by Cormorant Books at 3:56 PM No comments:

Considering the way we went out last year - with a bang - we can't help but feel incredibly excited about 2009. And you should be too! After all, just look what's on tap for January alone:


... and last but not least ... the news you've all been waiting for ... you may want to sit down for this: In addition to the two (2) titles we're releasing this month - One Careless Moment and The Gift from Berlin, Cormorant Books will launch its brand new website tomorrow!

Tomorrow. Stay tuned.
Posted by Cormorant Books at 11:28 AM No comments: