Because I Have Loved and Hidden It trailer

Posted by Cormorant Books at 12:29 PM No comments:

Email ThisBlogThis!Share to TwitterShare to FacebookShare to Pinterest
Labels: Because I Have Loved and Hidden It, Elise Moser, previews, video

June Hutton, author of Underground, made an appearance at the Sunshine Coast Festival in Sechelt, BC from August 12-15. She was gracious enough to report back to us on all that went down. 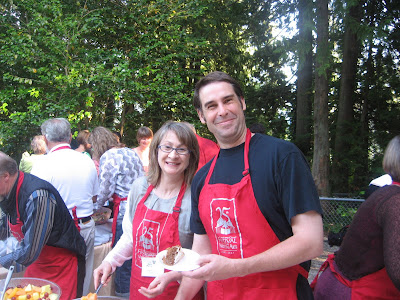 June Hutton (Underground) and Andrew Davidson (The Gargoyle) dish up dessert at the Sunshine Coast Festival of the Written Arts salmon dinner. It’s an annual tradition at the festival that writers don aprons and serve readers.

Underground is my first novel, so I arrive at the Sunshine Coast Festival of the Written Arts not sure what to expect. It’s my first public reading and no one knows who I am. So I’m nervous. Armed with work, I prepare to hide out in my hotel room.

It is an unseasonably cold first day, lashed with rain. Before I can reach the safety of my room, Wayson Choy kindly offers to buy Anthony De Sa and me hot Thai soup to warm us up. It seems that Anthony, whom I first met while waiting for the ferry, could be the one person who has heard of me. Over bowls of soup he says that Cormorant Books has designed a wonderful trailer for my novel, and that he has shown it several times to his high school students. My fear dissipates a little.

Joseph Boyden is the opening night act and later, over a beverage, we chat about rifles. I had forgotten until then that he and I met last year at a Vancouver International Writers Festival reception and that he had looked around the room and said, Hey, it’s you, me and Nino Ricci! It turns out that each of us has been published by Cormorant Books.

Next day I attend several events, and I meet more writers. An interesting discovery: many admit to being nervous. One even claims that nerves give his performance the necessary edge. At one point, I meet Marina Endicott who has read my book! The stage fright recedes a bit.

Later, a group of writers plans to go star-gazing on the beach until the wee hours, a ritual started, I believe, by Steven Galloway. But my first festival reading is the next day, and I want to be fresh. I doubt Hal Wake will be at the beach, either, but he notes pointedly: You’re not reading until 3 in the afternoon.

True, I counter, but I don’t want a raw throat. It’s nearing midnight. And it’s cold. True as well: the fear is back and I don’t want anyone to see it.

The next day, I show up early for my sound check, as was suggested in my author package. You’re early, one of the crew says. I nod and smile confidently. No, he says, I mean really early. He holds up his watch. It’s only 2 p.m. I’m on at 3. Oops.

I kill time until it really is my turn to read, noting anxiously that an audience isn’t exactly flooding into the theatre. Andrew Davidson comes by to encourage me. I’ll be terrific, he says. What a nice thing to do!

Suddenly, I hear my name. Applause booms from a large crowd (when did they arrive?). I leap onto the stage prepared to march to the microphone. Instead, John Cleese-like, I slam my toe into the wooden block set up before the podium for shorties like me. Before my nerves can completely take over, though, I slap my book onto the lectern and launch into my talk.

By the end of my hour on stage I’m hooked. Now a veteran of the reading circuit (meaning I survived), I’m ready for a fall season of festival readings.

That night, with my reading over, I throw caution to the wind, of which there is plenty, and join the gang on the beach.

Posted by Cormorant Books at 9:08 AM No comments:

The good folks at Open Book Toronto have just released their interview with The Heart Specialist author Claire Holden Rothman. Go on and check it out - she's a fantastic author with lots to say.

Here's yet another favourable review for Claire Holden Rothman's The Heart Specialist.

On a related note, the novel's been on the Montréal Gazette bestseller list for 21 straight weeks.

Really, why haven't you read it yet?
Posted by Cormorant Books at 10:30 AM No comments:

I just want you to know, first off, that I do love you. However, I think there are a couple of things we need to talk about.

There's this thing called 'punctuality'. I was hoping you'd heard of it, but I guess they don't teach good manners at season school. See, it's not such a big deal if you show up a little late. We understand. You're in a very difficult situation, what with global warming mucking up your schedule and all. But still, it would be nice if you stop in for your fully allotted time, and not just for brief visits.

Speaking of which: the whole 'not-staying-long-enough-for-morning-coffee' act is getting a little old. I may not be as exotic as my cousin Sydney or as slick as my friend Miami, but I have my qualities and I think I deserve a bit of respect. That's all.

I miss you, I really do. And I hope to see you soon.

So we've got a couple of sneak peeks for you today.

First off is the preview for Cary Fagan's Valentine's Fall: a wicked awesome novel about, in brief, how leaving high school doesn't guarantee that high school will leave you. Check it out!


Next - and I'm breaking the news here first - we've got an online catalogue coming out for our Fall list. Excited? You better be. Here's a look at the cover: 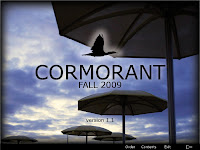 The image is a photograph from our upcoming book City of Words - and believe me when I say there are even more breathtaking shots featured inside. It's a must-have for any fan of photography AND literature.
Posted by Cormorant Books at 1:10 PM No comments: