Review of The Heart Specialist in Ottawa Xpress

"The Heart Specialist is a thoroughly enjoyable fiction that carries the reader away with its graceful prose while simultaneously casting light on a remarkable woman and truly amazing Montreal doctor."

Read the full review
Posted by Cormorant Books at 10:24 AM No comments:

"The Heart Specialist is a thoroughly enjoyable fiction that carries the reader away with its graceful prose while simultaneously casting light on a remarkable woman and truly amazing Montreal doctor."

Read the full review
Posted by Cormorant Books at 10:06 AM No comments:

I am not particularly sensitive to space and my work room is functional rather than beautiful, with a shelf of books on one side and a window overlooking the garden on the other. It’s just off the kitchen, so I can stir soups for my sons on breaks.

Have a peek, won't you?
Posted by Cormorant Books at 3:26 PM No comments:

One of our favourite hidden gems here at the old birdhouse is Kathlyn Bradshaw's The Frankenstein Murders, a novel that takes place three years after the events of Mary Shelley's original classic. Read a preview here.

Seeing it on the bookshelf next to me just now reminds me that there's been a glut of movies, books, and other media inspired by Frankenstein in the 150-plus years since it was first published. And I figured, well, this is the Internet, let's do what's all the rage and MAKE A LIST.

To make things more interesting, our list isn't made up of direct adaptations of the original story, but rather characters that adopt thematic elements or incorporate obvious references to Frankenstein's Monster. That opens the field up significantly, because it's pretty safe to say that the entire genre of modern science fiction was invented the day young Mary Wollstonecraft Godwin took up Lord Byron's drunken writing challenge.

So without further ado, here are our four favourite characters inspired by Mary Shelley's Frankenstein: 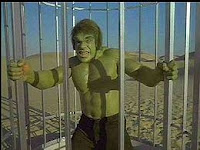 First appearing in 1962 and created by the legendary duo of Stan Lee and Jack Kirby for Marvel Comics, Hulk was originally conceived as a hybrid of Frankenstein's monster and the pro/antagonist of Dr. Jekyll and Mr. Hyde.

Several television series, multiple movies, numerous video games, and countless comics later, the character has gone on to become a pop culture icon in his own right: THE symbol of repressed emotion and uncontrollable rage. But the Angriest Man Alive hasn't strayed too far from his literary roots. His appearance - especially in the early comics - is obviously inspired by the Frankenstein monster's as portrayed Boris Karloff, and his origin at the testing site of a "gamma bomb" is a clear riff on the dangers-of-science theme that Shelley first established. 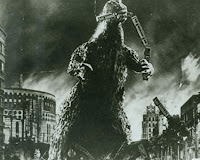 I really, really wanted to put Jurassic Park on this list. But let's be honest - there's only one film featuring a giant reptile that deserves to be here. Ishiro Honda's Gojira, released in 1954, was a smash hit that spawned 27 sequels of varying quality. But it was the original movie that best follows in Frankenstein's footsteps, embodying the sheer horror of science gone wrong (or in this case, terribly terribly right) in the form of a destructive being.

Because of the intentionally terrible voiceover work and giant monster kung fu that characterizes most of the later movies, people tend to forget that the original Gojira was actually a serious meditation on the effect the atomic bombings of Hiroshima and Nagasaki, as well as the firebomings of Tokyo, had on the mindset of the Japanese people. The focus was less on giant monster action and more on the human consequences of science divorced from morality. 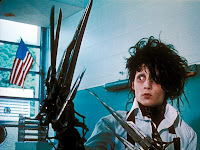 However, Frankenstein wasn't all gloom and doom. The monster wasn't born a soulless killing machine - in fact, he began good and only turned to evil after being spurned by his "father". What if Dr. Frankenstein, instead of being horrified, actually loved his creation?

Enter Edward Scissorhands, star of Tim Burton's 1990 film titled, shockingly, Edward Scissorhands. Edward was built by an inventor (Vincent Price!) and raised as his son. Thrust into the outside world after the tragic death of his father, Ed is increasingly exposed to human cruelty, but - thanks to strength provided by the love of a select few individuals (including a very young Winona Ryder) - he never betrays his gentle spirit.

Edward Scissorhands unearths and expands on optimism buried within the text of Frankenstein: that even the most unnatural-seeming evils can be prevented with ample doses of human affection. I'd say this is why Edward - and The Monster before him - continue to strike a chord with audiences.

Anyone with a passing knowledge of science fiction history will argue that robots are the spiritual successors of Frankenstein's monster - and it's hard not to agree when almost every story involving automatons ends with them wreaking on their flesh-and-blood creators.

But as number two on our list helps demonstrate, The Monster was never so one-dimensional as the majority of his malevolent mechanical brethren. And a few SF authors (most notably, the late great Isaac Asimov) have tried to depict artificial beings as complex characters. But it is Ridley Scott's 1982 film Blade Runner (based on the novel Do Androids Dream of Electric Sheep? by Phillip K. Dick) that best captures one of the most fundamental messages of Mary Shelley's Frankenstein: that what we create shows us exactly who we are.

Roy Batty (the role that defines Rutger Hauer's career) is a "replicant", one of many human-like machines built to operate in the harshness of space. Furious at the way his kind are treated as slaves, Batty goes rogue, fighting not just against his makers but what they have made of him.

All in all that sounds like (and is) your typical SF story. But What sets Blade Runner apart from others of its ilk is the way it blurs the lines between man and machine - between "man" and "monster", so to speak - and questions the qualities that we use to define ourselves as human beings. While both Roy Batty and The Monster both commit acts of evil, they also reveal flashes of compassion, honour, curiousity, and wonderment. These "monsters" are no better or worse than we are. To "own" the goodness displayed by these characters is to also "own" their ugliness. Once you move past the convenient excuse of their unnatural origins, it's hard not to see their humanity - and to be troubled by it.

This idea of mirroring, by the way, is one of the overarching themes of The Frankenstein Murders, and one of the reasons why it resonates so deeply with us. Keep that in mind the next time you're looking for a pithy read.

Well folks, that does it with this list. I hope you had as much fun reading it as I did writing it. Please let us know what you think - and go check out the preview of The Frankenstein Murders already!
Posted by Cormorant Books at 9:26 AM No comments: