Check out this fantastic review of Jeffrey Round's Death in Key West in NOW Magazine!

http://www.nowtoronto.com/books/story.cfm?content=170077
Posted by Cormorant Books at 4:11 PM No comments:

Email ThisBlogThis!Share to TwitterShare to FacebookShare to Pinterest
Labels: Death in Key West, Jeffrey Round, reviews

5 Books to take Pride in

Cormorant is proud to support Canadian LGBT literature, and even prouder to have published fantastic books by queer authors. Here's a list of some of our favourite LGBT-themed titles:

2) Bottle Rocket Hearts by Zoe Whittall - Catcher in the Rye for a more inclusive era. A must-read.

3) Other Men's Sons by Michael Rowe - A collection of powerful essays by a wonderful writer, journalist, and HuffPo blogger.

4) Death in Key West by Jeffrey Round - Fun, fascinating, and fulfilling. What more do you want from a murder-mystery? Now with 150% more opera.

5) And Beauty Answers by Elspeth Cameron - A profile of two of Toronto's most influential, colourful, and underappreciated artists from the first half of the 20th century.
Posted by Cormorant Books at 11:06 AM No comments:

The launch was also a fundraiser for the Writers Trust of Canada's Dayne Ogilvie Award for young LGBT writers. They're lovely people working for a good cause, and you should donate to them.

Unfortunately, we forgot to bring a camera (my fault - BI), but that's okay - we were way too busy and having way too much fun to take pictures.

Thanks to everyone who showed up!
Posted by Cormorant Books at 12:03 PM No comments:

Cormorant Books was in attendance at the 2009 Libris Award presentation that took place at Toronto's Radisson Admiral Hotel on Saturday June 20.

We would like to extend our thanks to all members of the Cormorant family, including authors, sales reps, freelancers, UTP, booksellers, and of course our wonderful readers.
Posted by Cormorant Books at 10:22 AM No comments:

Claire Holden Rothman, author of The Heart Specialist, has a snazzy new website. Go check it out at www.claireholdenrothman.com
Posted by Cormorant Books at 10:05 AM No comments:

After the Red Night reviewed at Quill & Quire

Here's a review of GG winner Christiane Frenette's new novel After the Red Night, from the good people at the Quill & Quire:

After the Red Night is a stylistic treat. It offers a subtle rendering of the self’s paradoxical mysteries and of our attempts to escape the things that make us who we are.

Read the rest of the review
Posted by Cormorant Books at 11:07 AM No comments:

Email ThisBlogThis!Share to TwitterShare to FacebookShare to Pinterest
Labels: After the Red Night, Christiane Frenette, reviews

Go here for other installments of The Guide

One of the fun things the fledglings at Cormorant Books like to do to promote our books is come up with freebies (or swag, or loot, or what have you).

Freebies are great. Everybody loves freebies. Making stuff is fun too. But in order to justify the expense, you better darn well make sure that there's a specific purpose behind them. And you better make sure people want them in the first place.

Here we'll talk a bit about one of the things we've become known for at events: buttons.

Buttons are awesome. They're small, easy to carry, relatively inexpensive to produce, and infinitely customizable. So it's very easy to fall into the trap of "Oh, hey, everyone loves buttons, we can put any old junk on them and people will wear them and everyone will talk about how great we are."

Thanks to a stroke of genius by our fabulous Duchess of Production, we've been making buttons for a couple of years now, and have a pretty good idea of what works and what doesn't. Here's a crazy-short list of observations I've compiled in that time:

1. Nobody cares about your colophon

Unless your colophon is an exquisite work of art, instantly identifiable and perennially fashionable, nobody is going to pick up that button. Even then, it's a longshot. Ever see anyone wearing a Nike swoosh button? Me neither.

Buttons, like everything promotional, only work if they're either ubiquitous, or have a hook. We can't afford to make a million buttons, and if we walked around trying to pin them on random strangers we'd end up in jail, so the hook is the way to go.

Our hook is The Sassy Slogan. Observe:

As mentioned above, free isn't enough - especially when you're working an event where free catalogues, free bookmarks, free books, free candy, and all manner of swag is being hurled about like confetti. People can only carry so much. You have to provide value if you want them to take your stuff. With an item like a button, the value is in design. So design is the most important thing to consider.

I can't repeat enough the point that buttons will not grant you instant fame and bestselling books. We've found that they're most useful at events like festivals or book fairs, in driving foot traffic your way. Word spreads pretty quickly at places like these, so as long as you're offering something that people can be excited about (like scandalous buttons), you're guaranteed a bit of attention.

Here's the catch: the people who are drawn to your booth by the buttons ... will for the most part only be looking for buttons. And that's it. Swag, as useful as it is in bringing people to you, only accomplishes half the job. And while fun freebies help to engage people, it's still up to you figure out what they want and what you can offer them - to form a rapport, in other words. Which is something you should be doing anyways.


I hope everyone found this helpful. Next time, we'll be talking about something we're still trying to figure out: online trailers!
Posted by Cormorant Books at 11:19 AM No comments:

Want up-to-the-minute updates on our authors, titles, and events, viewable from anywhere at any time? 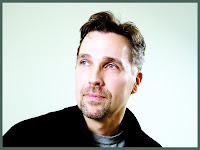 Jeff: On seeing a smiling face crossing the Steam Whistle Brewery parking lot with a case of beer in hand, I said to myself, "There goes one happy fellow." Five minutes later, the happy fellow popped into the green room where I sat waiting to read for an audience of brewery tourists. Lucky me. Grabbing a beer from the cooler, Bruce MacDonald sat and introduced himself as the previous reader. Lucky him.

"Butterflies?" he asked, giving me a shrewd look.

"No," I said. "Death In Key West," thinking he'd mistaken the title of my book.

"No, I meant do you get butterflies in your stomach before you read?" he replied.

"No, not usually," I said, not realizing I was smack dab in the middle of what could easily have passed for a scene in Bruce's debut novel, Coureurs de Bois.

Bruce nodded carefully. He explained how he'd had to read over a whirling child whose parents seemed to think it perfectly natural for their son to be spinning up a storm in front of the makeshift stage. "Sorry," he shrugged. "I don't mean to make you nervous."

Too late. But like Bruce, I, too, survived the whirling dervish, the adolescents munching Pringles and the mobs waiting thirstily for their brewery tour to begin. One to remember.

A few days later, I began reading Bruce's novel: Cobb, aka Randall Seymour, is a First Nations Indian. Recently released from prison, Cobb dreams he is about to be hanged. At the last minute, however, he's rescued by Crow. Crow has a mission for him. About the same time, a naïve young Ottawa man named William Tobe has a vision while fasting. The vision sends him to Toronto, rather than to law school as his family had planned.

Both men end up in Parkdale, Toronto's gritty west end that mirrors the upscale, mostly-white east end enclave known as "The Beach" like an evil twin. In Parkdale, crooked cops, crack whores, pimps, and practitioners of magic exist comfortably alongside diner waiters, bank managers, convenience store owners, and residents of the nearby mental health centre. In Parkdale, the insane are misunderstood geniuses and miracles happen amid the dirt and debris of everyday living.

It's here that Will and Cobb find their destinies as twenty-first century equivalents of the renegade coureurs de bois, running not furs but cigarettes. The visionary Seymour, who "sees more", joins forces with William Tobe and his "will to become." Cobb, of course, understands Will's vision, but can't tell him what it means. As with any vision quest, he can only guide Will and help him to find out for himself, as Will eventually does, while making Cobb rich along the way.

Coureurs de Bois is a book of highly subversive humour. It carries depth charges with each subtle, laid-back observation about our social system and why and how we mistreat our social cast-offs. It's satire of a very high order, with the most unlikely mismatching of characters since Hal Ashby's Harold and Maude. I read it with that rare sense of joy at discovering something refreshingly unique and occasionally startling.

One night, a few days after the brewery reading, I dreamed Bruce came to my house and left a frozen hamburger patty in my freezer. Then he went away again without speaking. I woke thinking of Cob and Will and their quests. "Hmmm," I thought. This book has strong medicine. If it's a vision quest, however, I have yet to learn what it means. Maybe Bruce will know. Though of course he won't be allowed to tell me.
Posted by Cormorant Books at 4:38 PM No comments: